Esqueleto Mariachi was released by Red Tiger Gaming, in March 2018, and it’s a slot with medium volatility, with a Mexican party theme that is centered around a crew of Mariachi skeletons and with 5 reels that sport no less than 40 active lines during every single spin. All in all, it’s a game that promises rewards of up to $250,000 and which has several cool features for you to check out. Among those features, you will enjoy seeing wilds, scatters with free spins, plus three random features that are based on the three mariachi. 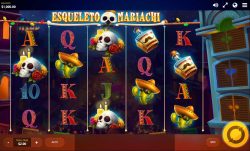 If it’s a slot machine released by Red Tiger Gaming, then the betting range is one that you can already guess. I can’t remember ever seeing a slot of theirs that didn’t start from a minimum of $0.20, and which didn’t end up with a maximum bet of $500. Esqueleto Mariachi is no different.

Because we know that 40 active lines are always in use, the line bet is easy to calculate, even though the slot doesn’t mention it. You spend between $0.005 and $12.50 per line. Keep those figures in mind, they decide how much your wins will be worth, and the paytable only gives you the number of coins.

You don’t get any multipliers in this game, so don’t expect for any of those features to come to the rescue and boost your wins significantly. What you see is what you get from those winning combinations, and so the 500 coins that will come via five Wild Mexican Girls get to bring you a jackpot of up to $6,250.

Now, there is also the potential for a lot more in Esqueleto Mariachi. Its big wins can have up to 40 win lines covered with these high-paying symbols, so it’s not out of the question that you’d get a payout of $250,000 in a single round.

The game has Medium volatility, so expect a balance between the two sides, with medium payouts that come often enough. The word Medium applies just as well to the slot’s RTP, which stands at 96.10%, though average would be more appropriate.

Feature wise, Esqueleto Mariachi is better than your average slot machine, though that’s mostly due to the random features which were implemented.

Expect these to be substitutes, but at the same time it’s not out of the question for them to end up forming wins directly. In fact, the slot’s best wins of 500 coins will come from them.

The only symbol to sport the image of the three Mariachi together, the one that also has the game’s logo, will be the scatter symbol and the trigger for 25 free spins. You get access to all the Mariachi random features during the free spins.

Three random features are available, each one based on a different member of the band.

Guitarrista: this one strums the guitar, summoning wilds and offering you guaranteed wins.

Trompetista: he huffs and he puffs and he blows symbols away with his trumpet, allowing for new symbols to form other combinations.

Maraquero: the third member of the band uses his marachas to shake the reels up, nudging symbols to form wins.

It’s a simple theme, the action revolving around three mariachi singers during the Mexican Day of Dead. The three skeletons are playing their own instruments and they’re very well designed. The same goes for the rest of the symbols, among which you can see a beautiful girl with a skull mask painted on, skulls, tequila bottles and cactus plants. The 10 to A cards are present, featuring a Mexican style design.

Graphics are excellent in this game, but it looks like a clone of a Thunderkick’s Esqueleto Explosivo, the theme being the same one.

Fans of Red Tiger Gaming’s slot machines will enjoy the action in Esqueleto Mariachi, a game with an average RTP, but with fun features and above average graphics quality.