Big Bang doesn’t make it a mystery what it’s about, the slot using the birth of the Universe for inspiration. 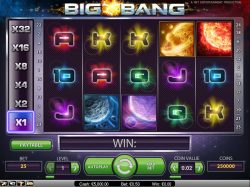 NetEnt released Big Bang as a slot machine that’s themed around the birth of our Universe. The event in question was known as the Big Bang, and so that’s what they called the slot machine as well. You only see a glimpse of it though, and that’s in the logo, while on the reels the symbols are mostly planetary bodies for the important symbols and various playing cards with colored lighting coming from behind for the rest.

The same colors that you see used in the playing cards are also present in the planets, so there is blue lighting for the asteroid, there are purple or yellow planets, but also a red one that looks like it’s a star actually. The graphics are pretty to look at, but I consider them somewhat on the simple side.

5 reels will sport 25 lines in Big Bang. It’s a game that includes big multipliers (up to 32x) and wild symbols, keeping the list short but the gameplay is still interesting. You can get individual wins of up to $64,000, while the RTP was set to 96% for this 2014 slot machine. 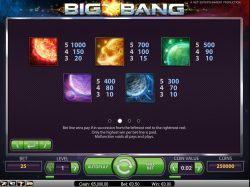 The Multiplier Meter is a very interesting part of the game, which will take into account the winning spins that you get and whether they’re coming in consecutive order. After each consecutive win, the multiplier meter will go up in value. The second win is multiplied by 2x, the third one by 4x, the fourth one by 8x, fifth one by 16x, and finally, the sixth one and the ones after that by 32x. Get a losing spin, and the multiplier meter will reset back to 1x.

The only other feature available, and the symbol that will help you trigger the multiplier more often, will be a wild symbol, that can replace all other symbols.

Big Bang’s theme is particularly interesting, as is the Multiplier Meter and the way that it triggers in your favor. The entire game and its features is built around this meter, and it’s worth it.