Beach is one of NetEnt’s games, which is themed around a tropical beach and which will use waves instead of spins on its reels.

Beach is one of the few slot machines that bother to change the way the symbols land on the reels. In it, you will find that the beach’s sand takes the place of the usual reels, though the various rocks and objects still get arranged on 5 rows of 3 icons each. The change consists in adding waves to the rounds, rather than spins.

Several waves will come in from the ocean, each one leaving several symbols/objects on the beach, until all 15 are present. The symbols are of course beach related, with the playing card logos being placed on top of round polished stones, while others show messages in bottles, shells, starfish and treasure chests.

The 5 reels might have an unusual way of bringing you their symbols, but you still get 20 lines to form, every single round. You can win $40,000 from its best combinations and as you play you can get scatters, wilds, Octopus wilds and free waves (spins). 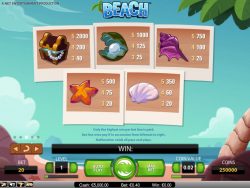 The columns 1, 2, 4 and 5 can get the regular Wild symbols, which are available only for substitution purposes and only if mixed with regular symbols.

The Message in Bottle symbol is one of the better thought out images, and it’s reserved for the scatter that brings you 8 to 24 free waves, if you happen to get three, four or five symbols. These are also used to retrigger the feature.

Octopus Wilds, which may appear on reel 3 only, can substitute for all regular symbols and they will have an interesting mechanic to add. The Octopus will switch two symbols, from reels 2 and 4, in order to maximize your win for the round. It will also double the win that’s formed with it as a substitute, so that’s how you can land a $40,000 combo, instead of a $20,000 one.

Beach looks great, with cartoon-style graphics of the highest quality, and its unique features make it very interesting to play.