Presto is a newly announced slot machine, which was programmed for official release on March 27th, 2018. The company that’s offering us this slot is called Habanero, and they’re well known by now for the high-quality graphics that they’re capable of implementing. It’s what they did here as well, in a slot that offers a magic show theme that is not exactly unique, but which I enjoyed anyway since the design is good. The things that we know about the game so far include the RTP that it will sport, which will be at an impressive 98%, along with the setup with 5×3 reels & 243 ways to win. The features include wilds, scatters, free spins and re-spins.

Betting will start from a minimum of just $0.30. There are 30 coins or more in each bet, and in exchange the slot will deliver 243 ways to win. You can increase both the coin denomination and the number of coins selected for each line, so you can go to a wager of $30 if you want to, or even a higher one.

The jackpot of Presto is not yet known. The RTP has been announced already though, and it’s going to be at 98% over a very long period of time, which is one of the best figures that you will find in a slot machine.

Guaranteed features: first of all, the game doesn’t mess about, and makes sure that if you have a longer period of time where you don’t get a feature, then you’re going to get one from it automatically. Look for the feathers counting down at the top, and once they reach zero, you get one of the four potential features automatically.

Two variants of the wild symbol were employed. One of them is going to come in the form of a regular wild symbol, which you use to form combinations if it’s landing on the right reel.

The second type of wild is going to expand and you can have entire reels covered by them. The image is also a bit more attractive, with the magician’s blonde assistant showing off the wild logo.

As for the way wilds work, they are just needed to appear on a reel that is part of a combo, and it will be included as one of the winning symbols.

Like in a lot of other slot machines, most of them in fact, you can trigger free spins in this one as well. There are 12 free games that are delivered, but first you need three or more Orb scatters visible at the same time on the reels.

This is another big feature that was implemented for Presto, with free re-spins delivered under the right circumstances. 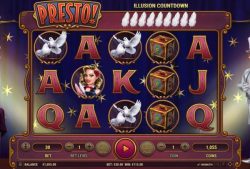 This isn’t an area where you can expect innovation, not in this slot at least, but there is no denying that the graphics quality are as high as you can reasonably expect them to be. You get a magic show that’s not unique as a backdrop story in a slot, with images present on the reels being mostly related.

Symbols start you off with the magician, his blonde assistant, a bunny, doves, a hand with cards, magic orbs and red playing cards.

You don’t have to be a fan of magic, in order to want to take advantage of the 98% theoretical RTP or the various features which were implemented here. The graphics are also excellent and they can be good reasons to want to play it.