Sizzling Spins is unique in a couple of ways for its developer, Play’n GO. For starters, the game is offered with ways to win, and then there is the grill-themed design as well, one of high quality though, as usual. It’s a game that offers a lot feature-wise, has huge potential and high volatility, and I’m sure many will love it.

A maximum of 1024 ways to win will be available as you play Sizzling Spins, though to start with you get only 243 on its 5 reels. Expect to win big, even up to $500,000, and to have multipliers, wilds, scatters or free spins to help out, while the Foil Blocker will sometimes just feel like an annoyance, while other times it’s going to be invaluable. 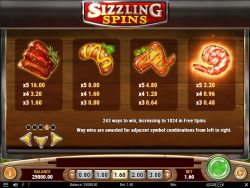 For a bet in Sizzling Spins, you will be able to pick a value that’s worth anywhere between $0.20 and $100. You have a maximum wager of $5 per line this way, since to make things simpler the slot will rely on 20 lines for wagers. In reality, you will be forming combinations through the ways to win that the game promises.

The game has a maximum win potential of $500,000, or at least that’s where the developer has capped it. It’s not a bad payout to get, on the contrary, though obviously expect a high-volatility environment as you play.

The 96.49% Return To Player is a percentage that’s looking pretty good, though it doesn’t mean much for the regular player. Your game sessions can vary wildly in results.

The Hot Reel is among the major features that Play’n GO implemented in this case. It will be picked at random, from one of the reels 1, 3 or 5, for each round. If you get a Foil Blocker symbol to appear on a Hot Reel, then it will be transformed into a wild and will bring a re-spin with it. The Hot Reel is locked for that re-spin, and a second Hot Reel is activated as well. Additional re-spins can be obtained through the same Foil Blocker if it lands where it’s needed. You can get all 5 reels hot this way, as all of them can be transformed during re-spins.

The major feature of Sizzling Spins, the one with the most potential, will be the free spins. Having them trigger is possible if you have 3 Chilli symbols scattered around. Pick one of them, to get 8 to 12 free spins from it. These free spins not only have bigger reels, but also 1024 ways to win instead of 243. At this point, Foil Blockers transform into wilds even if they don’t land on Hot Reels. Re-spins still come only from the Hot Reels though.

Another plus for the free spins is that the Chilli scatters are collectable here. 3 will get you a 2x multiplier, with 6 you go up to 3x, while with 9 Chillis you have 5x multipliers applied to the wins. 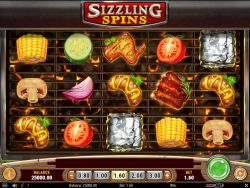 With the grill theme that’s been chosen for the game, the layout is a natural choice, using an actual hot grill while the symbols are various vegetables and meats that would go over it. You have the Hot Reel each round, which is a nice touch, and the overall design is a good one. For symbols, the game has ribs, sausages, chicken wings or prawns, while the lower symbols have cucumbers, onions, tomatoes, mushrooms and corn.

Sizzling Spins looks like it can be a lot of fun, and the game’s grill theme together with its appropriate features should be interesting for players.