Hot Shots is a 2018 release, a slot machine that has a soccer theme and a special focus on the 2018 World Cup, which is programmed to take place in Russia. The theme doesn’t reflect the location as much as you’d expect, but you do get Russian and other characters among the soccer players that appear in the game.

This game will feature 5 reels and on them 243 ways to win will be available for combinations to be formed on. Individual wins of up to $12,000 are going to be possible, and a long-term RTP will be set to 97.15%, an excellent figure for such a game. Among its features, you will discover the free spins, 3x multipliers, scatters or wilds that can expand in a cross shape. 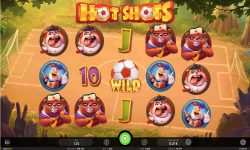 For a game with ways to win, it’s only natural for the betting system to still incorporate pay lines, 25 in this particular case. It’s just easier than relying on 243 coins for the bet. The bets will start from as little as $0.25, which makes it a cheap game to play with, but at the other end it can get to a value of $125. As you can guess, the full line bet’s range is $0.01 to $5.

For a really good payout, look forward to the symbol with the Russian Bear forming a combination, since it can bring you a reward of $1,000. You also get 3x multipliers during free spins, so you get to triple the original amount. Ways to win help make it even more profitable, as the 97.13% average RTP shows.

There are some unique features to be found in the game, but for the most part they’re just the usual ones, only improved and good enough to make the game interesting.

Though only the middle three columns can get wild symbols, which means that they’re not capable of paying directly by forming their own wins, the feature can be very profitable anyway. It will expand in a cross shaped pattern, meaning it does so both vertically and horizontally.

Another potentially profitable part of the game comes via the scatter symbol, the one with the Hot Shot logo. You can have it pay you 4 to 10x the stake when it’s visible 3 to 5 times. The same symbols will deliver 10, 15 or 20 spins for free, where all payouts get improved by the 3x multiplier. As an added bonus, you also get the wild symbol to appear more often.

Soccer and various other sports have all benefitted from the presence of animals in the past, and iSoftBet made the same decision for Hot Shots. You get various animals in the main roles, representing the countries that they’re from (bear for Russia, big cat for Brazil, bull for Spain, bulldog for England and cockerel for the French). The graphics are quite pleasant, the quality is high, so fans of soccer should have good reasons here to play it.

Enjoy this game, whether you’re a fan of soccer or not, as the RTP is good enough to make it a great pick for anyone.