Batman Begins, the 2005 film, is now offered by Playtech in slot machine form. The branded slot has been released in 2018 and now it’s widely available to players. The action revolves around Bruce Wayne and the other characters of the film.

In 5 reels that spin, there were 20 active lines used, enough to bring you several DC Comics progressive jackpots and regular payouts of up to $10,000. The features include wilds, but the game revolves around five different locations, from Wayne Manor to Arkham Asylum and others, each one with another offer to make during your spins. 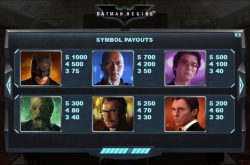 As for the game’s prizes, those come in the form of regular payouts of up to 1,000 coins or through the multiple progressive jackpots which you will find in pretty much any comic book themed slot machine out there. The cash value of a single combo will go as high as $500,000. The progressives can get you paid a lot better, particularly through the Grand Jackpot.

One feature, which you can count on seeing in every slot machine, is the wild. You have a logo here, complete with a Bat sign at the top. Most of the time, you get wilds to replace other symbols, or to form their own combinations, same as in every other game. Sometimes though, when these symbols land in hotspot positions, they expand and take over the entire reel they’re on.

A lot more can be talked about when it comes to the fight of Batman against the League of Shadows. There are five different bonus features, each one taking place in a different spot. To get a feature, you need to fill up a meter with symbols that appear on the hotspot area. Each feature has a different symbol that needs to appear in the hotspot. Once this happens, you get one of the following features which change the way the paid spins work.

The Temple: you have Flower wilds that substitute for symbols, expanding in an X shape.

Wayne Manor: Petrol Wilds are used as replacements and they spread to other reels by transforming symbols that appear in its path.

The Batcave: here we have The Batmobile as the wild, which moves to the left during free respins until it leaves the reels.

Arkham Asylum: The Bat-Signal is used to act as the wild and it will turn other symbols at random into wilds. Multipliers of up to 50x get applied to the wild’s wins.
The Monorail: as a wild, you have the Microwave icon. It picks one high-paying icon next to it, then transforms random symbols into it.

The theme is simple enough, being related to a 2005 film that had the same name. Once again, we have Bruce Wayne in the main role, and fighting against the League of Shadows in this case. The developer did a good job with the use of the five locations which you travel to, changing the experience a bit each time and keeping the game fresh.
As for the symbols used, those include Batman, Bruce Wayne, villains and allies of our hero, but also some incredibly boring playing cards. Not a great design overall, just a serviceable one.

Batman Begins doesn’t have a lot to offer in terms of graphics, but the progressive jackpots and the five different game modes should make a big difference.