The first installment in the Blood Suckers series, the game has the obvious vampire theme and one of the best RTPs around.

Blood Suckers was popular for a number of reasons since it came out in 2013, and the theme was one of them. It’s not as great if the graphics are the part that interests you most, but you still get better than average looks from its all-themed symbols. The action puts emphasis on various blood-sucking creatures of the night, on things that repel them (bible, gloves of garlic, holy water) or kill them (wooden stake and hammer). You get a glimpse of some of the victims as well, but the focus is clearly not on them. A room that has blood smears on the walls can be glimpsed at in the background. Overall, you can tell that a fair amount of effort has gone into this game.

You get your chance at winning in Blood Suckers, where combinations will form on 25 lines, while 5 reels will spin. The game’s excellent RTP of 98% is a huge reason why it was so popular with players, but it doesn’t hurt that single combinations can pay up to $45,000. To get those, you need wilds, bonus games, scatters, free spins and 3x multipliers, all available inside. 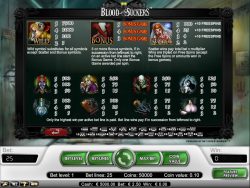 There is enough control for you to exercise over the betting options that are available. You can use wagers of up to $2 per line, where 4 coins of $0.50 would be selected. You can go a lot lower, you can reduce the number of lines, so there are plenty of ways to get to the amount that you want to use. It can be worth anywhere from $0.01 to $50.

The wild symbol, showing a vampire and his victim, will pay 7,500x and will be the replacement that you need in so many situations.

Stake & Hammer, bloodied and made out of wood, will serve as the triggers for the bonus game. These symbols have to form a combo of three or more, on an active line, or you don’t get anything.

There is a symbol that does its job no matter where it appears, as long as three or more are showing. The Vampire Bride scatter will activate 10 free spins which have 3x multipliers, plus it can pay up to 100x the stake.

Blood Suckers is one of the more popular games you will find right now, even though it’s been more than half a decade since it was released. Look at its 98% Return to Player, and you will understand why.