Three gold mining dwarves are the heroes of Boom Brothers, a NetEnt slot machine that became popular fast when it was released. 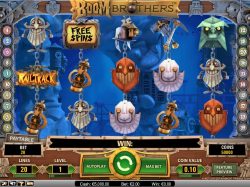 Boom Brothers will feel like a fairly unusual type of slot machine, but a fun one, particularly for players that love the Steampunk genre. The Boom Brothers that are mentioned in the title are three in total, and they’re metallic robots, designed in a Steampunk style that doesn’t feel futuristic enough for what they represent. Everywhere you look in the background or on the reels, you will see the brothers or various contraptions that they would use.

There are cogs and wheels spinning on the borders as well, and a mine in the background. The heads of three of these metallic beings are on the reels along with a smaller robot with a big moustache, lamps, tools and a robot bird in the role of the canary in the mine. It’s a fun game, with a new theme that’s quite exciting.

With the 5×3 reels that will spin in Boom Brothers, as many as 20 active lines may be used each round. You get plenty of chances to win, particularly since there are free spins, 3x multipliers, the Railtrack feature, 2nd chances, bonus games, scatters and wilds present inside. A win of $75,000 from a single combo, with the right symbols, is not out of the question.

The control over the betting system is total, so starting from the left of the bottom row, you can modify how many lines are used (up to 20), the level of the bet (up to 5 coins per line) and the coin value (maximum of $1). The reels will spin in exchange for a bet as small as $0.01, but at the other end you can win a lot more if you wager $100.

Wilds will pay the largest amount, 7,500x in the base game, when forming a combo. They also substitute, so they’re often useful to you.

A simple Free Spins logo triggers your free spins, with a 3x multiplier that applies to all wins.

2nd Chance is a random feature, offered during some of the non-winning rounds, in an attempt to get you paid.

Railtrack is a feature that you activate with the help of track pieces, 3 to 5, which will also deliver a small cash prize at the start. You pick a cart and you hope that it will win the race.

Boom Brothers is a unique and fun title, a Steampunk style slot that has cool new features to give you as well.