Attraction is a science themed game, not a romance one, and it takes you inside a laboratory to explore the power of magnets. 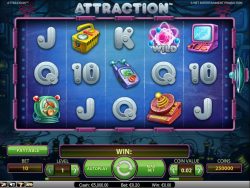 NetEnt has released Attraction in 2014, as a slot machine with a very interesting science-inspired theme, the action taking place inside a laboratory. The images shown on the reels have something to do with the forces of attraction, and you get images of electrons, of various computers and measuring equipment, but also playing cards which appear to be made out of metal.

If you check out the image shown beyond the reels, you have the lab and its equipment there. The reels themselves are placed on a blackboard, with white chalk lines between them. It’s very well designed, and it would’ve been perfect if the playing cards wouldn’t have been there.

You get to play with 5 reels in Attraction, forming your combinations on 10 active lines. Wins of $5,000 are available, as are features such as the Magnet, re-spins and regular/sticky wilds.

One of the defining features in Attraction is going to be the Magnet that you see move around the reels. It is activated as each regular spin or re-spin starts, so it’s always there. To take advantage of it, you need a wild symbol to appear on the same row or reel as the magnet is placed. In exchange, you will be given 1 re-spin with at least 1 sticky wild.

Each re-spin has 2 magnets active, so the odds of getting them to work are increased. Following one of these re-spins, you receive 1 extra re-spin and 1+ sticky wilds if the wild lands on the column or row that the magnet is on.

As for the wild symbols, these come in two variants, regular and sticky. The regular version appears on reels 2 to 4, during all types of spins. It’s only available as a replacement.

Sticky wilds are only offered during re-spins, and they work pretty much the same as regular wilds when it comes to their substitution power.

Attraction has a unique theme, cute cartoon-inspired graphics and a Magnet feature that is different than what you get from most slots.