A slot machine that has gotten the attention of science fiction fans, Alien Robots has been designed by NetEnt.

One of the cuter looking slots that you will discover in NetEnt’s collection is called Alien Robots. The game is robot themed, but it uses a cartoon style design and its characters are cuter than you’d expect a typical such being to be.

You have them more like Wall-E than the industrial and personal robots that they’re supposed to represent. There are robots with wheels, with tracks or without either, there are robot dogs and robo-brainiacs, so you certainly get enough variety out of them. Weirdly enough, the playing cards have 8-bit designs and they’re quite colorful. The graphics look excellent, even though the game is from 2013, so it’s already a little bit old.

You are going to find Alien Robots interesting in more ways than one. For example, it’s a slot that pays at 96.6% RTP, it offers a mix of 30 lines + 243 ways to win on 5×3 reels, and its top prizes can give you $25,000 on a single line. It’s even going to have several interesting features, including here the wild, the scatters and the free spins with expanded sticky wilds. 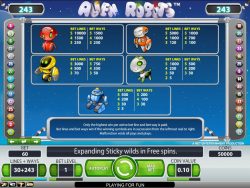 Betting can be done on 30 lines, or on 30 lines + 243 ways to win. The former requires a bet of 30 to 150 coins, depending on the bet level that you select. The latter option will require that you double your investment in the game, so the bets vary between 60 and 300 coins in that case. Since denominations get up to $0.50, the highest bet possible is worth $150.

The Wild Brainiac Robot will be substituting for other symbols in the base game, coming regular-sized.

With the UFO Scatter appearing several times, it will give you 10, 20 or even 50 free spins. For this feature, the wild is turned into an expanded symbol that is sticky. The other reels re-spin, but the wilds remains in its position.

Alien Robots has a lot to offer a player, despite its age, and when it comes to graphics, features and RTP it’s an excellent pick.